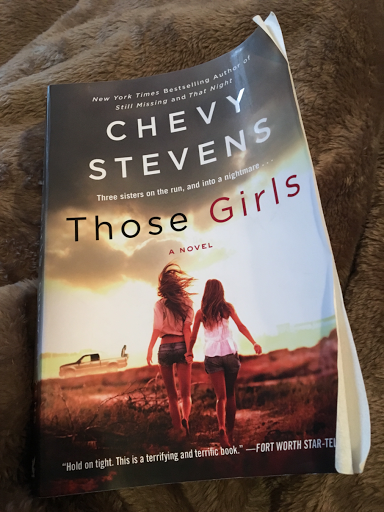 I just finished reading Those Girls by Chevy Stevens, and I’m glad it’s finally over.  I don’t like to slam authors because I know it’s not easy doing what they do for a living, but this book is pure garbage.
On my most recent trip to Barnes & Noble, I decided I wanted to try to discover a great new, underrated book.  I’ve seen all of the newly released books, and many of them didn’t appeal to me this time around, but I also take pleasure in finding something that isn’t being/ hasn’t been heavily promoted and being among the first to identify its greatness. 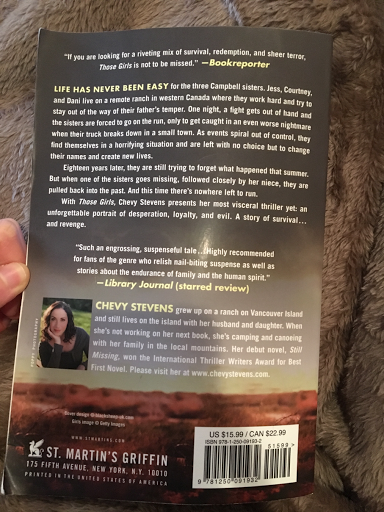 Life has never been easy for the three Campbell sisters.  Jess, Courtney, and Dani live on a remote ranch in western Canada where they work hard and try to stay out of the way of their father’s temper.  One night, a fight gets out of hand and the sisters are forced to go on the run, only to get caught in an even worse nightmare when their truck breaks down in a small town.  As events spiral out of control, they find themselves in a horrifying situation and are left with no choice but to change their names and create new lives.

Eighteen years later, they are still trying to forget what happened that summer.  But when one of the sisters goes missing, followed closely by her niece, they are pulled back into the past.  And this time there’s nowhere left to run.

(Back of the book)

Maybe I’m just a fool, but that’s how I stumbled upon this book.  I gave the first couple of pages a quick glance and, unfortunately, only $15.99, plus tax, later did I realize my mistake.
I hated this book.
The story is over-the-top, ain’t-gonna-happen, unrealistic nonsense.  I never read fantasy books because I prefer to read about stories that could actually take place, and while this book is by no means a fantasy novel, the events that unfold throughout this story are completely outlandish.  (Spoilers beyond this point)

Let’s start with the fact that these girls got away with MURDER.  Really?!  Three redneck teenaged girls are capable not only of killing their abusive father (which was in self-defense, even if that’s never specifically called out in the story), and only 18 years later they get caught?  I’m not buying that, Stevens (well, metaphorically, anyway, since I did pay for this book, and for that I will kick myself for a very long time).

Okay, so fugitives-on-the-run aside, I kept reading, hoping this book would redeem itself.  Nope.  You’re telling me that not only do these girls make a clean getaway after murdering their father, but then, after being stupid enough to take a ride from 2 strange, overly-friendly boys they’ve never met (these girls’ naivety drove me absolutely insane) and getting kidnapped (of course!), they manage to escape scot-free again?!  Because they have so much prior experience in escaping from psychotic kidnappers?  (And let’s not forget to mention how implausible the kidnapping situation itself was: how on Earth were Brian and Gavin able to hold the girls hostage on their parents’ property?  There’s seriously no one else around?  This just seems a little too convenient for the boys if you ask me…)
Now let’s talk about the ending.
First of all, the fact that Courtney waited 18 years to go back to Cash Creek again seems entirely unrealistic– if she really was so deeply affected by what happened when she and her sisters were kidnapped, why would she spend 18 long years holding in her emotions before deciding to go through with murdering the brothers?
I also don’t understand why Courtney didn’t kill Gavin when she clearly had the chance.  There was no reason for her to be kidnapped a second time, other than prolonging the ending of an already insufferable novel.
I could go on all day about why I didn’t enjoy this novel, but I think by now I’ve made my point.  At least I finally finished this book (I made sure I read the entire thing, since I copped out and abandoned the last bad book I tried), and I’m looking forward to reviewing something else soon!
Don’t forget to subscribe if you love honest reviews!